Lung cancer is the #1 cause of cancer deaths in the United States. Patients who choose lung cancer screening are likely to be diagnosed at earlier stages than those who don’t get screened. Lung cancer is too often caught late and more difficult to treat when diagnosed at late stages. If lung cancer is caught before it spreads, the likelihood of surviving 5 years or more improves to 60%. If you smoke or have smoked, there is a way to find lung cancer early, when it is easier to treat. Talk to your doctor about a screening called a low-dose CT (LDCT) for lung cancer.

What is Lung Cancer Screening?

A low-dose CT for lung cancer is a more detailed, painless CT scan of your chest that uses radiation at a low dose. It can show lung cancer at early stages that may be hard to see on an X-ray. It does not use any dyes or injections and requires nothing to swallow by mouth. Once the scan has started, it takes approximately 10 minutes to complete.

Am I Eligible for Lung Cancer Screening?

You are eligible for a lung cancer screening if you are between the ages of 50-80 in fairly good health (50-77 for Medicare) AND: 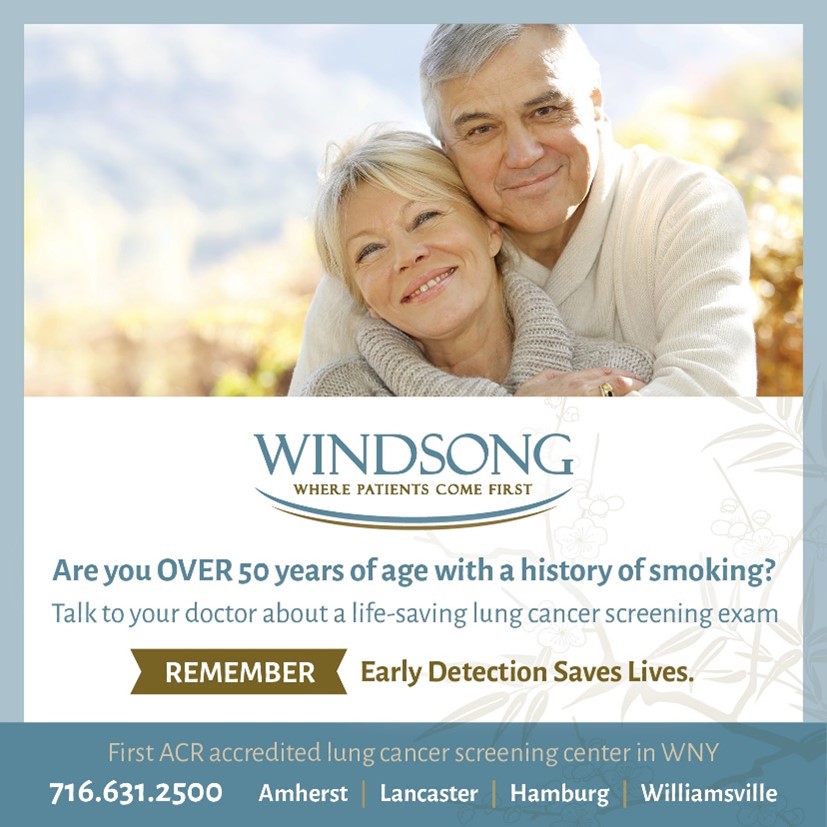 Windsong Radiology and the American Lung Association believe that everyone deserves the opportunity to lead a full and healthy life. Sadly, many systemic issues have contributed to health disparities, including those facing lung cancer. Studies have found that Hispanics, Asians, American Indians/Alaska Natives and especially African Americans experience higher risks for developing lung cancer through exposure to air pollution, secondhand smoke and having higher smoking rates.

People of color who are diagnosed with lung cancer face worse outcomes compared to white Americans because they are less likely to be diagnosed early, less likely to receive surgical treatment, and more likely to not receive any treatment. More than 29 million uninsured Americans are people of color, and research is clear that having health coverage impacts people’s medical care and ultimately their health outcomes. Addressing racial disparities in healthcare coverage will therefore be critical to addressing racial disparities in lung cancer care.

The quality of imaging and the accurate diagnosis of its content can make a major difference in what treatment a patient receives. Windsong is dedicated to the acquisition of the most advanced technology available and employs only highly trained, certified technologists. Interpretation of the imagining and often times treatment is provided by our Fellowship trained, Board Certified Radiologists who come from impressive backgrounds representing all subspecialties. Whatever the radiology requirement, however difficult the diagnostic challenge, Windsong is pleased to carry on the commitment of providing the highest quality diagnostic imaging and service for our patients and the physicians who care for them. Windsong Radiology is a designated American College of Radiology (ACR) Lung Cancer Screening Center. For more information, please visit windsongwny.com.

***Populations at Risk | State of the Air | American Lung Association