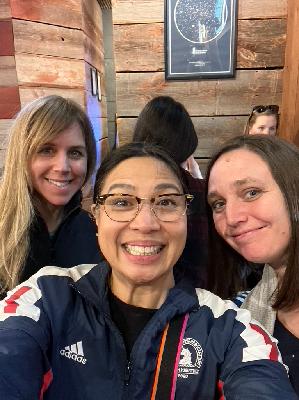 Let's make sure everyone can benefit from healthy lungs.

My best friend had to move her wedding when covid got in the way of the first date she had planned. This time it was set for Colorado. In October. It was unspoken that I'd be there if Lee was in a good place with his health.

It just so happens that I was able to say, YES! I can still be in the wedding! As plans unfold Cristin says, CALL ME! You won't believe this! There is a Run The Rocks Race and it's for the American Lung Association! Are you kidding me?! IT'S HAPPENING!

Below is the story of how we got here. But if you want the cliff notes:

1 Donate to our run 2 It's for a great cause 3 It's in honor of being able to do things with the beautiful lungs we have and to make sure others have the opportunity to breath and do what they love, too.

On April 16th, my spouse, Lee Stanford, was at the start line of a family 5k run. We knew something was wrong, but I reassured him it was just for fun. He was skiing in Banff, playing hockey twice a week, and logging in running miles just two weeks before this.

On April 26th, he was diagnosed with IPF (idiopathic pulmonary fibrosis). By May 5th, he was 24/7 oxygen dependent. His lung capacity diminished rapidly but not as rapidly as the speed at which the doctors and staff at the U of M moved in to diagnose Lee and prepare him for a double lung transplant.

I’ll cut to the chase. On August 22, Lee received the beautiful gift of two lungs. His recovery is going remarkably well, and it wouldn’t be the case without all the research to help the countless people suffering from IPF.

So now it’s time to pay it forward. I am running the Run The Rocks 10k in honor of all the patients still suffering from various lung diseases. And to set the stage so Lee can run this race with me TOGETHER in the near future.

Here's your chance for all who have asked how you can help. Please help me pay it forward so others don’t worry about where they’ll find their next breath.