Why I Climb - Kyle Fekete, Chief of Special Projects,
Louisville Division of Fire 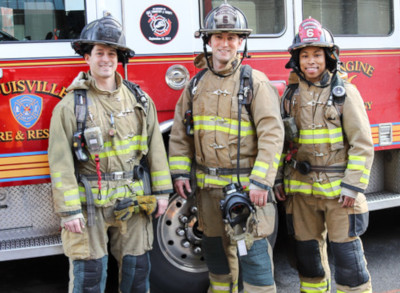 When I participated in the inaugural Fight for Air Climb Louisville, it was a chance for friendly competition between a group of Louisville Firefighters from Rescue 2. The next year, we got more teams, from more firehouses involved, growing the competition. As our teams grew, so did our fundraising totals, which added another layer to the competitive aspect that we enjoy.

Each year we climbed, Firefighter Tim Groft was one of our serious competitors. Tim was diagnosed with cancer that had spread to his lungs in 2016. During the 2017 climb, Tim, who was undergoing chemo, was still among the climbers on our team. In September 2017, Tim passed as a result of the cancer, which was determined to be caused by occupational exposure to carcinogens and ruled a line of duty death.

While we still enjoy the physical and fundraising competition that the climb brings, the annual event is now a great way for us to honor and remember Tim.

Note: Kyle Fekete, center in photo, has been the captain of the Louisville Fire Department’s Climb Team since the Climb’s inception. LFD has earned the highest fundraising firefighter team trophy year after year. The Louisville Climb Planning Committee initiated a Grit & Grace Award in honor of Tim Groft, annually selecting a participant who serves as an inspiration, climbing in spite of adversity.

Why I Climb - Doug Owen Several years ago, I started climbing glacier covered mountains as a challenge. My youngest son Gray (18) has begun joining me on these climbs. Most recently he and I spent seven days climbing to reach the 19,341-foot summit of Mount Kilimanjaro in Tanzania, Africa, one of the world’s seven summits. I am on the right in the attached picture, my son, Gray, on the left.

Since I am not 18, I must train hard to be able to successfully summit these mountains while carrying a 40-50 lb. backpack. Training can be the ultimate bore! Part of my training program includes climbing up 23 floors with a 30 lb. backpack in the fire stairs one of the downtown office towers. I do this twice a week and typically spend 2-3 hours climbing the stairs 10-15 times.

The Louisville Fight for Air Climb provides many positives for me, perhaps the obvious because it is outside and not in a gray stairwell! The Climb also gives me a fitness goal to hit where I can judge my training and make adjustments in advance of a summer climb. However, the most important and meaningful is seeing the joy on everyone’s face who braves the cold to be part of and enjoy such a wonderful physical event.

While the joy and meaning of the event is different for every participant, I know we are all working together to make a small difference. Lung cancer has or does in some way or another impact everyone. Bob Moore, the founder of my company (originally Harry K. Moore, now JLL), and perhaps the best commercial real estate practitioner in Louisville, lost his battle to lung cancer in 2001. While that was early in my career, his leadership and guidance are with me every day and are the foundations of my success.

Why I Climb - Gwen Cooper 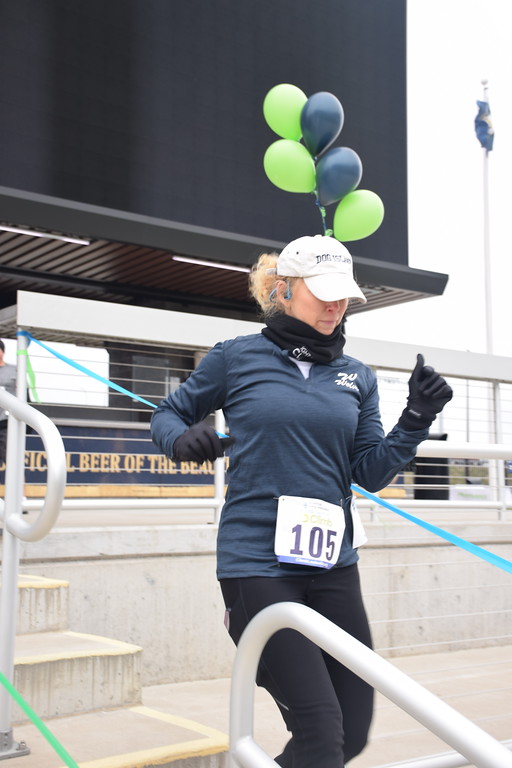 I love the saying: we all have lungs so we’re all in this together. That itself could be my “why” I climb. But for me it’s about family and our future.

I was just 22 when my mother died from lung cancer at the young age of 47. I often say that I wasn’t old enough to appreciate her and I’m sad that I will never get to apologize for my teenage behavior (I do that daily and hope she hears me 😊).

Unfortunately lung disease didn’t stop with my mother. My mother-in-law lived with COPD for years, relying on oxygen, my father-in-law also died from lung cancer, my brother-in-law has emphysema and just finished radiation on a "questionable" spoton his lung.

But there’s more. My youngest son lives with Asthma. I hope no parent ever has to watch their child struggle to breathe and not have the tools available to help them.

And finally, my oldest son is a firefighter. I’m proud of him but worry about the long term effects of smoke on his lungs.

Thankfully we have the American Lung Association to continue using donated dollars for research, programs and services to make sure families like mine have the best chance of breathing for as long as possible. Won’t you join us in our Fight for Air Climb?

Why I Climb - Lindsay Thurman 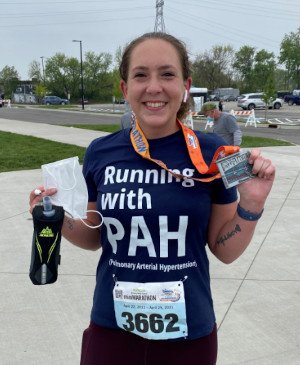 My name is Lindsay and I climb to support research for lung conditions such as Pulmonary Arterial Hypertension.

I was diagnosed with PAH 14 years ago. It's a condition where the blood pressure in my lungs is too high making it difficult for my heart to pump blood into my lungs to pick up oxygen for the rest of my body. I know what it feels like to not be able to breathe and, in those moments, nothing else matters.

In January of 2020, I was hospitalized because my PAH had become severe. My doctor decided to switch up my medication and I was able to breathe well for the first time in my adult life. The medications I am currently taking didn't exist when I was first diagnosed! I was even able to take up running and completed both the KDF Mini-Marathon and the full Louisville Marathon in 2021.

The hard work of the professionals in the medical community have truly changed my life and I hope to help spread awareness and raise money because no one should have to struggle to breathe.

Why I Climb - Bridget Bailey Williams 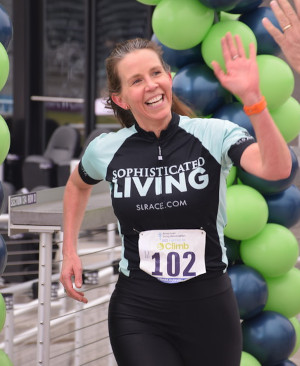 My initial reason for climbing wasn’t entirely altruistic, as I’d been on the hunt for a unique physical challenge to train for. However, in learning more about Fight for Air Climb and the mission of the American Lung Association, I thought the event would be a perfect opportunity to provide me with the endorphin rush I am always chasing while honoring the memory of Lois Williams, my late mother-in-law, who died from lung cancer.

Several years in, I still relish the challenge, perhaps even more so as often the heart is more willing than the joints, but the event has taken on a much deeper meaning. First, there’s the camaraderie of the participants, particularly the core group that shows up to practice on chilly winter mornings. It’s a warm and welcoming atmosphere that equally envelops first-timers and weekend warriors as long-time climbers. Then there’s the mission, something that really hits home when you learn the reasons why people climb and the fact that lung disease doesn’t discriminate based on age, race, gender, or health.

When the race was held in a stairwell at the PNC tower, the walls were lined with tributes to those who lost their battle with lung cancer and lung disease, along with those who were still fighting. Those images stay with me, filling me with gratitude as my lungs fill with air to power me through each flight of stairs. They also remind me that my participation is a privilege as I do my small part to support the American Lung Association.

* Bridget will be climbing 50 times around Lynn Family Stadium on March 25th to celebrate her 50th birthday. The American Lung Association is fortunate to have Bridget as a Kentucky Leadership Board member, a Climb Ambassador, Climb Planning Committee member, media sponsor and generous advocate for the advancement of lung health.

Join the Fight For Air Climb and raise funds to support the mission of the American Lung Association.

Register as a New Team Captain

Register as a Team Member

Register as an Individual

Register as a Volunteer

Support the fundraising efforts of someone participating in this event.

Make a donation by searching for a event participant using all or part of their first, last, team, or company name.