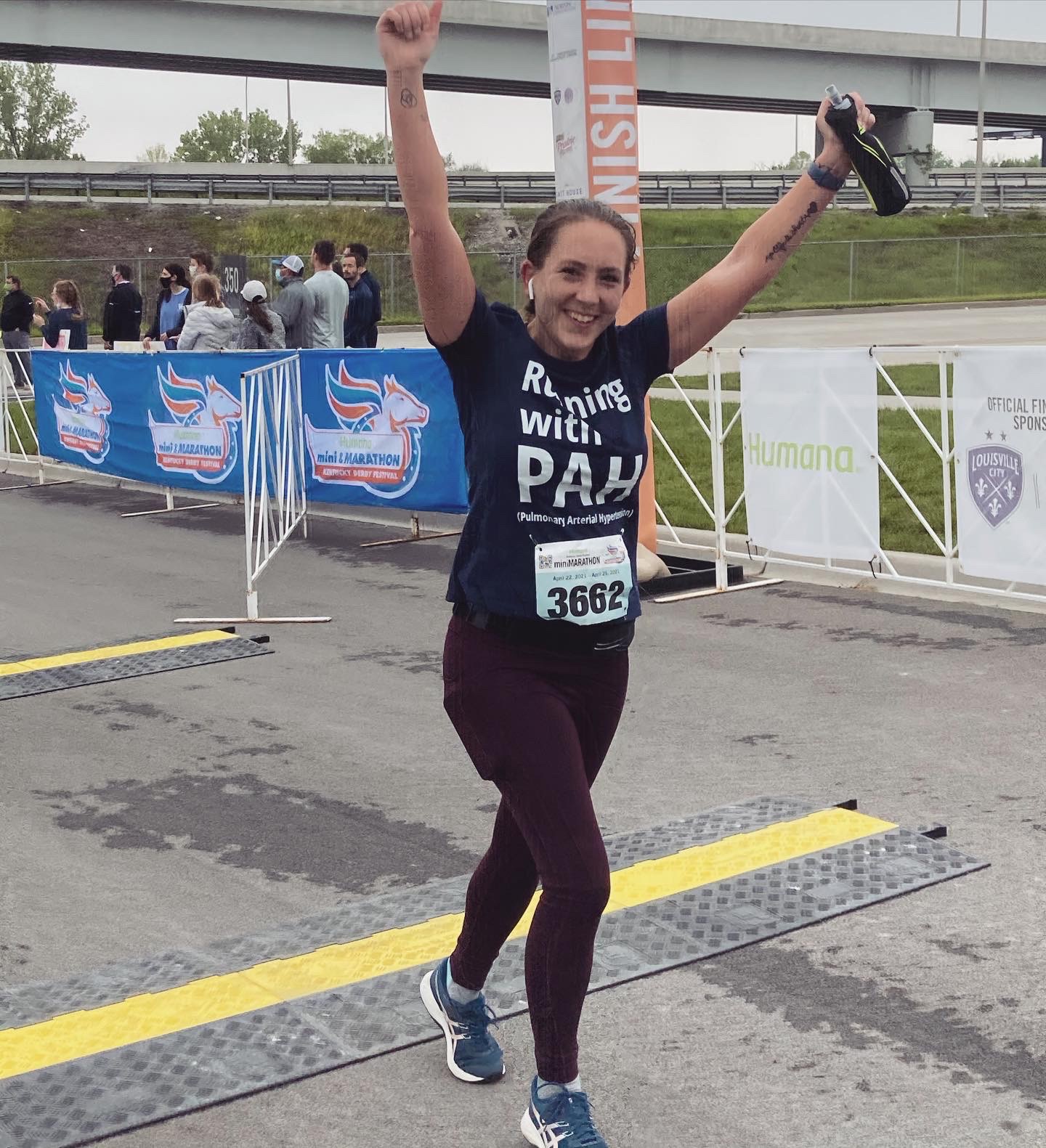 Why I Climb - Lindsay Thurman

My name is Lindsay and I climb to support research for lung conditions such as Pulmonary Arterial Hypertension. I was diagnosed with PAH 14 years ago. It's a condition where the blood pressure in my lungs is too high making it difficult for my heart to pump blood into my lungs to pick up oxygen for the rest of my body. I know what it feels like to not be able to breathe and, in those moments, nothing else matters. In January of 2020, I was hospitalized because my PAH had become severe. My doctor decided to switch up my medication and I was able to breathe well for the first time in my adult life. The medications I am currently taking didn't exist when I was first diagnosed! I was even able to take up running and completed both the KDF Mini-Marathon and the full Louisville Marathon in 2021. The hard work of the professionals in the medical community have truly changed my life and I hope to help spread awareness and raise money because no one should have to struggle to breathe. 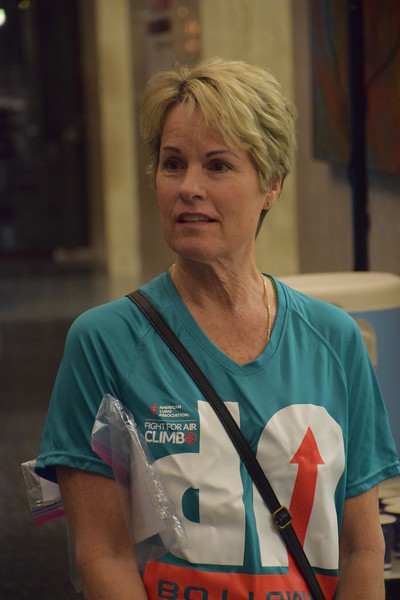 Why I Climb - Denny Hovious Brooks

My husband Jack and I would always plan trips where we could hike. We made it to most of the United States National Parks, Newfoundland and Canada, and loved the idea of being surrounded by nature while pushing ourselves beyond our limits. Perhaps God was preparing us for the biggest hike of Jack’s life.

Jack was diagnosed with small cell lung cancer in December 2014. He was career Navy for twenty years where smoking was the norm. Although he quit in 1991, the damage had already been done. We knew the moment Jack was diagnosed our lives would never be the same…

After eight months of chemo and radiation, Jack was given the “all clear.” We were THRILLED!! Five days later he was in ICU, intubated with an oxygen level of 71. After two weeks we made the difficult decision to remove him from the ventilator. Jack lost his life on September 12, 2015.

I climb because I pray others do not have to go through the devastating loss of a loved one…. I climb to raise funds to further research on lung cancer….and I climb with hopes that in the very near future a cure will be found to end lung cancer for once and for all. 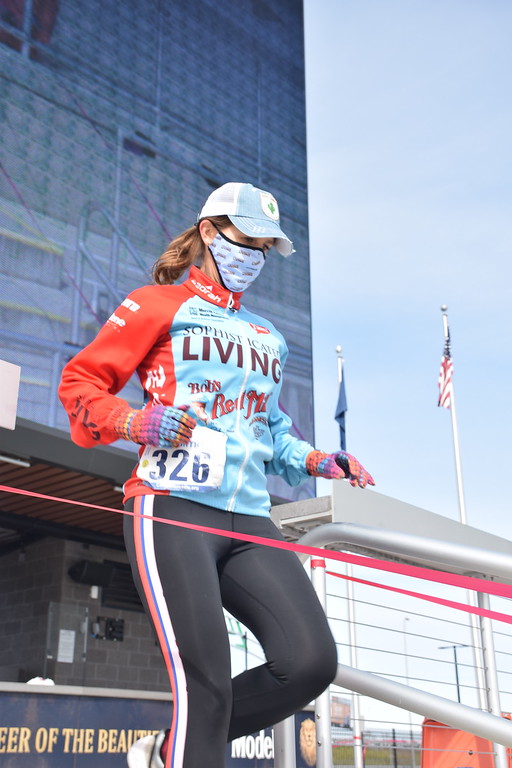 Why I Climb - Bridget Williams

My initial reason for climbing wasn’t entirely altruistic, as I’d been on the hunt for a unique physical challenge to train for. However, in learning more about Fight for Air Climb and the mission of the American Lung Association, I thought the event would be a perfect opportunity to provide me with the endorphin rush I am always chasing while honoring the memory of Lois Williams, my late mother-in-law, who died from lung cancer.

Several years in, I still relish the challenge, perhaps even more so as often the heart is more willing than the joints, but the event has taken on a much deeper meaning. First, there’s the camaraderie of the participants, particularly the core group that shows up to practice on chilly winter mornings. It’s a warm and welcoming atmosphere that equally envelops first-timers and weekend warriors as long-time climbers. Then there’s the mission, something that really hits home when you learn the reasons why people climb and the fact that lung disease doesn’t discriminate based on age, race, gender, or health.

When the race was held in a stairwell at the PNC tower, the walls were lined with tributes to those who lost their battle with lung cancer and lung disease, along with those who were still fighting. Those images stay with me, filling me with gratitude as my lungs fill with air to power me through each flight of stairs. They also remind me that my participation is a privilege as I do my small part to support the American Lung Association. 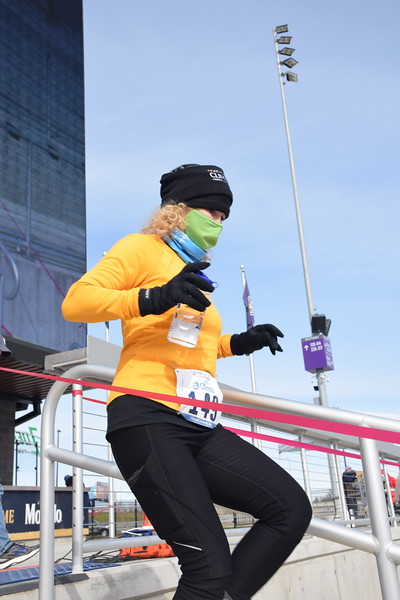 Why I Climb - Gwen Cooper

I love the saying: we all have lungs so we’re all in this together. That itself could be my “why” I climb. But for me it’s about family and our future. I was just 22 when my mother died from lung cancer at the young age of 47. I often say that I wasn’t old enough to appreciate her and I’m sad that I will never get to apologize for my teenage behavior (I do that daily and hope she hears me 😊). Unfortunately lung disease didn’t stop with my mother. My mother-in-law lived with COPD for years, relying on oxygen, my father-in-law also died from lung cancer, my brother-in-law has emphysema. But there’s more. My youngest son lives with Asthma. I hope no parent ever has to watch their child struggle to breathe and not have the tools available to help them. And finally, my oldest son is a firefighter. I’m proud of him but worry about the long term effects of smoke on his lungs. Thankfully we have the American Lung Association to continue using donated dollars for research, programs and services to make sure families like mine have the best chance of breathing for as long as possible. Won’t you join us in our Fight for Air Climb? 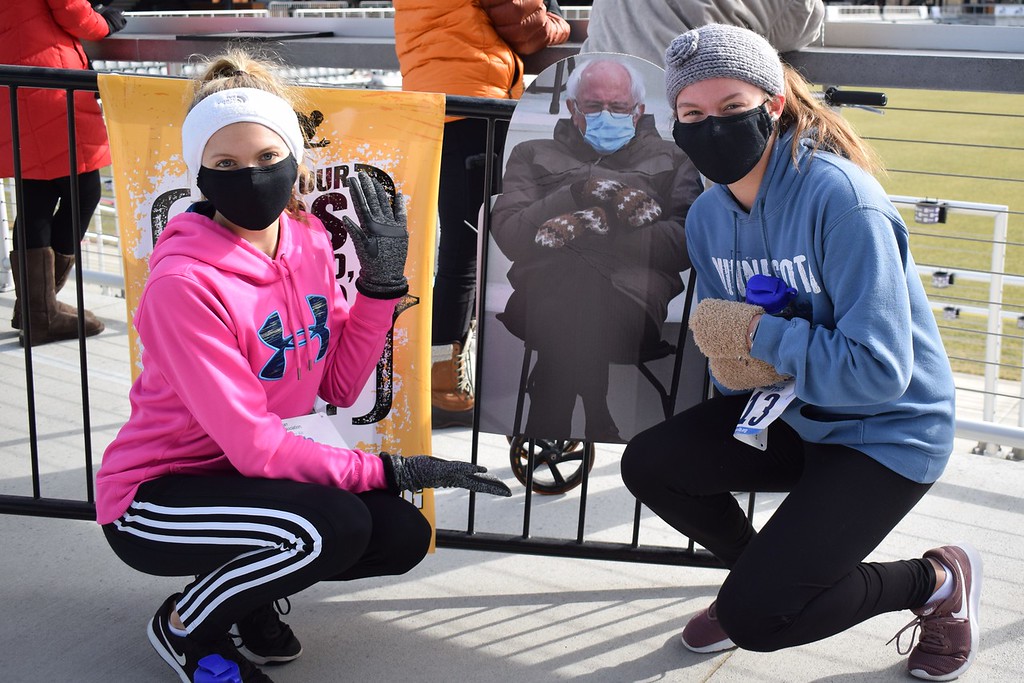 Why We Climb - Lauren & Katherine Fancher

I climb so that one day kids, including myself, will never have to live in fear of an asthma attack or breathing difficulties. I climb in hope of one day a cure or a reliable treatment for asthma and other lung diseases. Many of my friends suffer from severe asthma like me, and it often limits us. I remember very vividly back in 2018 when I layed in the nurse's office gasping for air after a severe asthma attack, while the nurse called the ambulance. It was very frightening, and is something I hope no kid ever has to experience.

I climb so that one day everybody is educated about asthma and other lung diseases. I have seen my sister suffer from severe asthma all her life, and I want to make a difference. Many teachers and coaches are unaware of how to help during an asthma attack, which can be scary for a child/athlete. Which is why I teamed up with the American Lung Association to distribute clipboards, pamphlets, and brochures to teachers and coaches, educating them about how to help during an asthma attack. I hope that through the support of others we can raise enough awareness so that no child has to worry about facing an asthma attack alone.