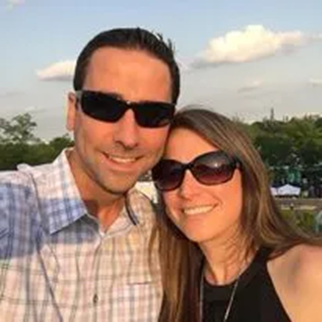 I am asked to share my LUNG FORCE story, but, truthfully, the story is not mine, it really is all about my husband Rob. My involvement in this organization is because when we were given his devastating diagnosis, we both found hope with the mission of the American Lung Association.

For those who knew Rob, we remember how he loved talking movies, competing on the golf course or softball field, interviewing people for his articles, and finding new bands. His enthusiasm for life was contagious, and Rob enjoyed being involved in the Delaware community. He was a healthy man, who watched what he ate, cheering loudly for the Eagles and Phillies, maintained a healthy lifestyle and was a non-smoker. Many of you may have known him from his college days at UD, as a writer for various publications in Delaware or perhaps as a bartender who poured you a drink while chatting you up at a local bar. He had everyone he knew laughing at some point during your time together, and I guarantee you walked away hoping you could have hung out with him once more.

In January 2019, Rob was diagnosed with stage IV metastatic lung cancer. The doctors told us that Rob had less than a 5% chance of survival past one year and that it would be a hard, tough battle. Having beaten Hodgkin’s Lymphoma as a teenager, Rob knew what he was up against and was ready for the fight. He fought through chemo, radiation and immunotherapy treatments, underwent brain surgery to remove one of three brain tumors, and endured physical and occupational therapy with the same passion and desire he had throughout his life, before his illness. While undergoing treatment, Rob worked hard to continue to live his life fully by making his visitors continue to laugh, reminiscing about his adventures or quoting the lines from his favorite movies. He never wanted his cancer to define him. In November of 2019, the cancer became more aggressive and spread throughout his body, and sadly Rob left us in January of 2020.

Since Rob has passed away, my world - our world- has changed, but I have found comfort in the legacy and hope that Rob left behind. In October 2019, Rob spoke at the Lung Force Walk in Rehoboth and conveyed how with his diagnosis, he learned the importance of compassion and support for anyone who is battling lung disease and cancer. I have thought about these things a lot in the last year. All the people who have offered me hope, compassion, and support as I find my way. Rob also talked about being thankful. In closing his speech last year Rob said “I’m thankful for each day I get a chance to keep battling, to do the simple things in life, like take my dog for a walk, go to dinner with family, even squeeze in the occasional round of golf, and of course, to attend inspiring events like the LUNG FORCE Walk.”

Lastly, the one word that I can’t stop saying or sharing with people when asked to share my “why” is HOPE. It would have been easy for Rob to abandon hope when he was told that his cancer had come back more aggressively and earlier than his doctors had anticipated, but he looked at me and said - “We are going to fight.” Even as his cancer progressed, he would tell me he wasn’t going to give in and neither should I. So I take the message of hope with me every day as I proudly support the ALA and LUNG FORCE because... warriors never quit. We will always have hope that we will win the battle against lung disease and lung cancer. If you are here you believe in the same thing and are therefore continuing to honor Rob and all those who have or are battling lung disease and lung cancer. 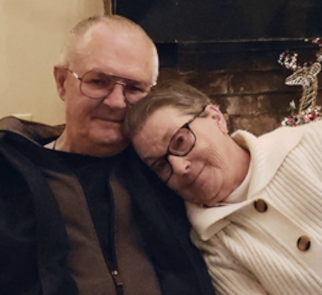 My name is Heather and the story I am about to share is not my own but sadly has become mine to tell. This story is about my Mother. My Mom’s name is Christine Dunn and she lost her battle to lung cancer on July 8, 2019.

Christine was diagnosed with Stage 1 lung cancer in May 2019. Sadly she passed away seven weeks later. I think back to the first time my Mom complained of pain in her back/shoulder area to me. Of how it was such a small complaint that would eventually lead to the devastating news. News that her life would be coming to an end. My family most certainly never fathoming that Urgent Care would be the place to discover her disease. When my Mom was diagnosed with lung cancer her CT Scan showed one nodule on her lung. That one nodule quickly attacked with a vengeance. There is so much my family will never understand but we are hopeful that one day there will be some resounding answers.

In the beginning my Mom underwent two ER visits only to be misdiagnosed with a respiratory virus. Thus giving the cancer more time to grow. After weeks of no improvement my Mom sought out treatment at Urgent Care where they discovered the growth on her lung. With the lung cancer being Stage 1 the prognosis seemed promising. The plan set in place included 16 rounds of radiation and two rounds of chemotherapy. My Mom completed only half of her treatments before she died. I think back to how much I looked forward to hearing the ring of that bell at the radiation center. The bell celebrating her last treatment. But silence was all my family heard on July 8, 2019.

My Mom was a beautiful woman. She was so kind, optimistic, and had this calming quietness about her. She was the heart of our family. We hurt everyday. Lung cancer hurts on a multitude of levels. I struggle through sleepless nights asking myself why my Mom was diagnosed with Stage 1 lung cancer but died seven weeks later? Why after six weeks of radiation and chemotherapy was she urgently rushed to Johns Hopkins Hospital having shortness of breathe? Isn’t chemo and radiation intended to kill the cancer? But my biggest question is why in 11 short days my Mom’s cancer spread to a terminal stage?

It is painful to remember my family’s naivety when first arriving at Johns Hopkins Hospital. We were so hopeful for a quick recovery. So was my mother. Sadly the days were a struggle for her. In those 11 days of hospitalization my Mom underwent oxygen treatments , radiation rounds, swallow tests, and the worst was painful throat ulcers caused by the radiation. She could not eat or drink. After just 11 days my Mom’s cancer was so aggressive it had metastasized and spread to her liver and other organs.

On July 8, 2019 my family was escorted down a hall and brought into a room. We were told my Mom would lose her life to lung cancer. Thirteen hours later my Mom took her last breathe. She was lovingly surrounded by myself ,my Dad, my brother’s Bill and Jim, and sister’s Nicole and Christiane. All her family lined up one by one and said their goodbyes. Most importantly my Dad was with her when God brought her home.

Christine was only 69 years old when she died. I tell my Mom’s story so others will know her. My Mother will always be in my family’s hearts. A beautiful woman who died four short days before her 50th wedding Anniversary will forever live through my Dad. My Mom’s smile will never be forgotten by her five children, 15 grandchildren, or by her son and daughter in law. Lung cancer stole My Mom from my family. But in taking her last breathe My Mother’s voice will forever be heard. My family is hopeful that Christine’s story and life will spread awareness where less and less family’s suffer at the hands of lung cancer.