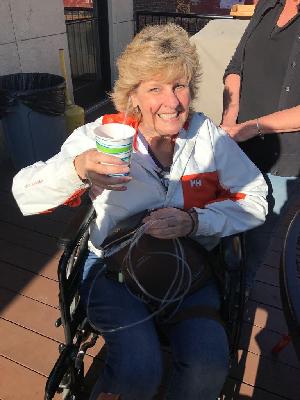 ****4 YEAR UPDATE****This past year has been full of memories. There wasn't a day that passed that mom wasn't thankful for. She was able to enjoy the holidays and a last minute vacation to Nashville, TN just to name a few. As the days continued and Mumzy grew more tired, I had to face the reality that this was coming to an end. It is with the heaviest of hearts to report that Mumzy received her wings on Wednesday, April 24, 2019. Let's walk in memory of Mumzy (Cindy) this year to continue raising money for such a rotten disease.

****3 YEAR UPDATE**** Cindy started out the year on an experimental drug which did not agree with her. She has not had any treatment since January 2018. Although her tumors are slowly growing and she requires oxygen that has not stopped her drive. Please come for a fun day at the zoo to raise money for a great cause. Early detection is key!

Tuesday, August 25, 2015 our lives were changed. Cindy, my mom was diagnosed with stage 3B Lung Cancer. The questions, unknowns, and tests yet to come were over bearing but we knew Cindy would fight; and boy did she ever. Two heavy rounds of chemo and one heavy round of radiation over a 7 month time frame, Cindy stands tall, strong and continues to fight. On behalf of my mom, sisters and family, we would like you to join us September 30 to walk and raise money in hopes of finding a cure.


Thank you for visiting our LUNG FORCE team page. Together, as a team, we are really looking forward to participating in this event and we greatly appreciate your support. Our collective efforts will help raise awareness and funds to protect lung health.