Join me to take a step forward towards new hope for people with lung cancer! 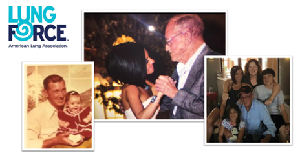 Thank you for visiting my page. I'm here to make a difference in the lives of people impacted by lung cancer and lung disease.

As you know- the work I do at the Lung Association is not just my job – it’s personal. I lost my Grandfather Charlie, who raised me, to lung cancer 6 years ago. My Grandpa Charlie was lucky enough to participate in an immunotherapy trial, but unfortunately, his lung cancer was detected when it was stage 4. He lost his fight just under 6 months after his diagnosis.

In 2022 alone, it is estimated that over 235,000 people in the U.S. will be diagnosed with lung cancer and over 130,000 will succumb to the disease. And unfortunately, last year in New Mexico only 2% of those at high risk for lung cancer were screened, which was significantly lower than the national rate of 6%. New Mexico ranks 47th among all states, for lung cancer screening rates, which places us in the bottom tier.

The lung cancer survival rate has dramatically increased- by 33% over the past ten years, thanks in part to treatment advances, increased access to care, and more people at high risk for lung cancer being screened. However, despite this progress, lung cancer remains the leading cancer killer of women and men in the U.S. and in New Mexico.

The American Lung Association's LUNG FORCE initiative plays a critical role in raising awareness of lung cancer. Since 2014, we have worked to show solidarity for those impacted by lung cancer. Being a part of LUNG FORCE is about supporting those in need and saving lives by funding innovative research and early detection initiatives.

Will you support LUNG FORCE in New Mexico this year?

Anyone can get lung cancer, and absolutely no one deserves it. I appreciate your consideration and your support of this important cause.

Participant
Registered for this event.
7