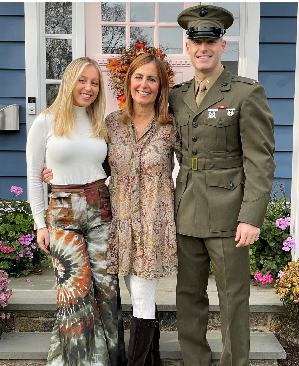 My stepmother, June Ross Burke(center) with my brother and sister.

June Ross Burke, wife to Kevin, mother to Courtney and Danny, and stepmother to Patrick and Riley, was diagnosed with Lung Cancer in October of 2018 after having a routine wellness check and inquiring about a chest screen due to several of her friends’ recent lung cancer diagnosis. After that screen and subsequent scans the doctor told her she had an angel above her and that she likely just saved her own life.

Within a week she was in surgery to remove half of her lung and then battled through chemotherapy making it to remission about one year later.  Unfortunately, after another year or so the cancer came back and she is currently on a trial therapy but thriving while also supporting ALA Lung Force causes in New York.

Through all of this, June has never lost her giant smile, her loving embrace or her joy for life, being a mother and now a grandmother (her favorite by far!).  She is a living example of the effectiveness of early screening that can save so many lives.

Be a part of the FORCE to defeat lung cancer and lung disease one step at a time.