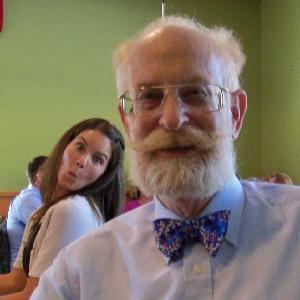 Thank you so much for taking the time to visit my page.

I've signed up for the Lung Force run/walk in memory of my father, Paul Friedman, who passed away last summer after a two and a half year battle with Lung Cancer. Below is something I've written to honor his fight and his warrior chain of hospital bracelets.

They say a picture is worth 1,000 words. But really what they mean is, some images don’t require any at all. Sometimes, no amount of words exist to do a picture justice.

You see, it would be easy for me to tell you that my Dad was diagnosed with stage 4 lung cancer Thanksgiving of 17’. It’s a bit harder to describe the two and a half year fight. How the immunotherapy made him itchy all over… the constant bloating and burping… the hope we all shared because immunotherapy has a higher efficiency rate than chemo… But still the cancer spread.

I can tell you about the gamma knife surgery on his brain… about my father taking an Uber to the hospital that morning. Alone. Because he didn’t want to bother anyone and didn’t want me driving the 6 hours to be there. Besides, mom would be there to pick him up. So, he went alone. He had to be strapped to the bed in a halo cast and he was alone…

I can tell you what the most aggressive form of chemo did to his body while it fought the cancer down as much as it could, till even the chemo couldn’t best the tumor any longer. I could tell you how for almost three years he’d been going in to see multiple doctors for scans, then results, then infusion after infusion, then rinse and repeat.

I could explain how none of the treatments worked the way we hoped.

I can take you through the start of the clinical trial approval process. A last-ditch effort. The loss of appetite. The difficulties breathing… eating… sleeping… We didn't get very far.

I can tell you what this cancer has taken from me and my family… A husband. A father. A grandfather and best tickle monster ever. What it’s taken from the world… a singer, actor, card player, synagogue builder, a friend and neighbor, a mensch, a good man who believed in doing the right thing.

I have imagined over and over the moments it has stolen. The would-be anniversaries, the holidays, the late-night conversations and morning coffees. The teaching moments. The pride in his eyes when his grandchildren become Binai Mitzvot. The graduations or possibly even dancing with his granddaughter on her wedding day and toasting to his grandsons on theirs.

I can tell you about all of it, but my words won’t have the same impact as a 40 ft chain of hospital bracelets…

All because a young man picked up a cigarette.

"Be a part of the FORCE to defeat lung cancer and lung disease one step at a time."