Why I Run for Lung Force 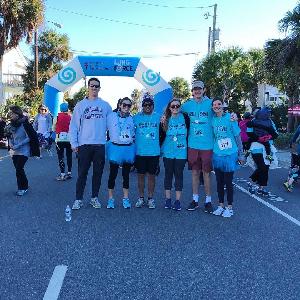 This fact has always hit me hard: lung cancer is the leading cause of cancer deaths among women and men. Each year, more people die of lung cancer than of colon, breast, and prostate cancers combined.

I spent my time before PA school working each day with patients battling lung cancer and that experience brought a whole new awareness into my life. I was overwhelmed with inspiration as I watched patients and their families persist through their battle and for some, was fortunate to witness their years extended. While those days allowed me to head home with a smile and feeling of fulfillment, there were also the days of defeat, loss and sadness. The days when patients were out of options, and I watched families experience true heartbreak. Because of the latter, research and lung health awareness are more important than ever.

My work has now influenced my path and I just graduated from physician assistant school this August. I am empowered every day by the warriors I met in my past work.

Each year since participating I have run in honor of someone who has lost their battle with lung cancer.

Year 5 is in honor of those lost to COVID-19 and the healthcare heroes who have been on the front lines, scientists and other researchers working to fight this pandemic. Although there is a focus on lung cancer, American Lung Association encompasses all things lung health and this past year they have taken on the task of educating our country, which in my eyes is the most important step in acheiving normalcy. They created vaccine toolkits, explained COVID-19 symptoms, recovery, treatments and more. Knowledge is power and ALA has done so much to provide people with that power.

Year number 4 was in honor of Coach. He saved me my first year of teaching when I was frequently knocked down, he gave advice unlike anyone else knowing exactly what to say even if it wasn’t what you wanted to hear. I witnessed him change so many young boys and inspire them to become respectable young men, spending hours talking with them and understanding them rather than simply reprimanding them. He motivated and inspired me more than he knows. I owe a lot of where I’ve landed and what I’ve become in my time since living in Charleston to him. The world needs more of him.

Last year I ran in honor of a dear friend's father who I was fortunate enough to meet last summer during his courageous battle with lung cancer. He was truly one of the most impressionable people I have ever met and I am comforted knowing he and his many attributes live on through his amazing children and network of friends.

The one who started it all, my first year as a team captain I ran in honor of Bobby (also known endearingly as LR 0065), who showed optimism and humor throughout his own battle and inspired me to incorporate joy into all aspects of my life. He lit up a room, wrote weekly emails that left me laughing and handled his battle with grace and wit. He always made sure to remind us: love you, mean it.

By joining or making a donation to our team, you will be contributing to the ongoing efforts of improving and saving precious lives.

Together, we are a force to be reckoned with.

Participant
Registered for this event.
5