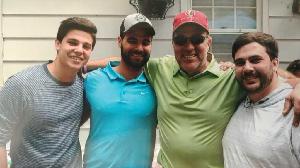 When Robert’s wife, Susan Settler, and his two amazing daughters, Julia and Lauren, approached me about doing something for this cause to benefit the American Lung Association; without hesitation, I told them I was all in! With the help from my wife, Mona Settler, and my staff (Addy, Karen, Marie, and Morelia) we joined the team to walk the event and help raise money to save lives by preventing lung disease through research, education and advocacy.

TO JOIN OR DONATE, PLEASE FOLLOW THE LINK: ACTION.LUNG.ORG/GOTO/UNCLEBUCKSTRONG

IF THE LINK DOES NOT WORK PLEASE COPY AND PASTE TO YOUR WEB BROWSER.

Participant
Registered for this event.
User Provided No Response