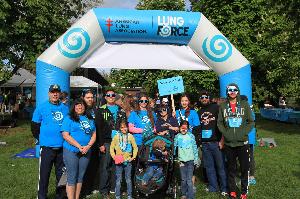 The reason I joined the lung force walk: When I was 17 years old my Dad finally quit smoking for the last time. January 1st he started a new life. He had a persistent cough and everyone just said, it's probably just your lungs clearing themselves out. However, the coughing only worsened and he went to the ER.

The doctor sent him to get an x-ray. When the Doctor came back with the results he said you're going to have to do something you have never done before! You need to call and setup an appointment with an oncologist. Tell them you need to be seen right away because your Doctor said you have lung cancer!!

Shortly after, he had a biopsy scheduled and then was scheduled for surgery. I believe it was October of that same year that he had 1/3 of his left lung removed.

He recovered well and everything seemed great. Then he started getting intense pressure headaches. He would get seizures in only his left leg. So again he went in to the doctor. This time he had several brain tumors that were from the lung cancer spreading.

He went through a couple different trials. The first was a radiation laser knife treatment that targeted it specifically. It worked in the beginning and then it didn't. The next treatment was an intravenous chemo where they go into a vein in the groin and travel all the way up to the neck before releasing it. Again this worked at first and then it didn't!

He was placed on hospice. He passed away at home surrounded by all of his close friends and family. He was just 45 years old and I was 20 years old. My sister and I both had a wedding planned for the following month in hopes that he would have made it! He passed away on February 28th 2004 and we were married on March 27, 2004.

Participant
Registered for this event.
7