Cycling in Memory of James Davies 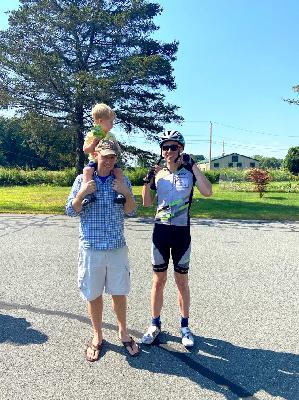 I am cycling in memory of my father, James Davies, who passed away following complications from a double-lung transplant. My father had what is known as Alpha 1 Antitrypsin Deficiency. This disease actually impacts your liver which results in low production of the Alpha 1 protein. The alpha 1 protein is used by the lungs to maintain elasticity and without it lung damage occurs.

Alpha 1 wasn't officially discovered until the 1960's and was not well known even in the medical world, so my father's condition was blamed on asthma. He wasn't officially diagnosed with Alpha 1 until the mid 1990's. By this point, his lungs had deteriorated due to decades of having low alpha 1 levels. The symptoms were similar to COPD and he required oxygen at all times.

He opted for a lung transplant in order to live a normal life witout bringing an oxygen tank with him everywhere he went. The first transplant he had was successful at first but his body slowly rejected his new organ. He received another lung transplant in 1998, this time to replace both lungs, but again his body failed to accept the new organs. He passed away on April 13, 1999 after nearly a year in the hospital.

I am riding to raise money for the American Lung Association in his memory.