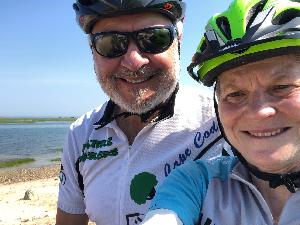 I am joining hundreds of other cyclists and the American Lung Association to raise money to support the fight against air pollution, lung cancer, COPD, Asthma and other serious lung diseases.

As some of you might remember, I started riding with Alan, and the Walter’s Wheelers team in 2009 in celebration and support of my dear friend Madeline Crivello, and then later for my Uncle David, both of whom eventually died from lung cancer. In an ironic twist, I (a non-smoker) developed lung lesions that turned out to be localized slow growing lung cancers (adenocarcinomas) that were successfully surgically removed in 2015 and 2016.  I am so grateful that (so far!) there has been no further progression or recurrences of any lung cancer nodules

I feel it is very important to support the American Lung Association's important work: activites related  to COVID-19, the “LungForce” initiative that raises money for research and treatment for Lung Cancer (the #1 cancer killer for women) as well as the ALA’s primary prevention activities, such as efforts to reduce air pollution.

We are able to ride in person (safely) and  I will be joining Alan on the team, The Wheelers, for my eleventh ride, hoping to ride at least 25 miles.