I Ride for my husband Nigel 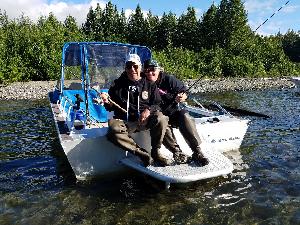 Riding for a future full of Adventures Together

I am riding for husband AND best friend Nigel Guest. Together with thousands of other cyclists around America, we are raising funds to fight and beat lung disease and to increase awareness about the importance of lung health and healthy lifestyle choices.

As many friends may know, Nigel has been beating Lung Cancer for 8 years and is still going strong. Five days after we got married, June 28, 2014, we flew to MD Anderson where it was caught at stage 2 non-small cell carcinoma and had a Right lower lobectomy. It wasn't the best honey moon, but we tackled cancer as a team. Two months later we were back down at MD Anderson for an aortic aneurysm stent. We were so excited that we had made it 2 years with no signs. Unfortunately, we were about to go into Maintenance and they discovered a new spot that ended up being Stage 2 Small Cell in the opposite lung which resulted in radiation and 4 months of Chemo. One of the hardest things was him losing his signature silky silver hair we all knew and loved. Nigel was such a trooper, although his favorite chemo meal was McDonalds Filet-O-Fish, which is NOT a typical meal for our family. His third battle began in spring 2021 with only radiation. We look forward to this being the last. Thankfully, we go on Maintenance April 2022 and I look forward to never eating a fillet of fish again.  :)

We have decades of adventures planned and I can't wait to participate in the ride. Please join me with your support

Setbacks Don't have to break your Spirit
Well two weeks into training, I crashed my bike on some Ice in a tunnel trying to be an over achiever. No injury to my right knee Joint that was replaced almost 2 years ago, but The muscles around it took a beating. Off the bike until monday to recover. That still gives me three weeks to do this. GO Team Run Wild Fitness.

Thank you so Much
Wow! 24 hours and I want to thank everyone for your support and Kind words during this journey for me. I am so afraid I wont make the 26 miles but with all of you cheering me on, I got This!