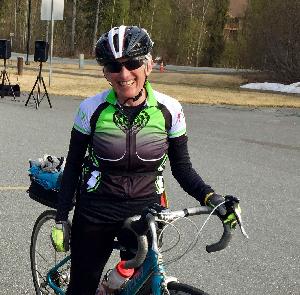 In March 2004, I was training for my 12th marathon on a hilly course, when all of a sudden I couldn't breathe and run at the same time. An x-ray didn't show anything and the problem was a mystery for a couple of months. Finally in early July, a scan showed advanced lung cancer. There were complications on top of the cancer and the prognosis wasn't good. I began chemo and radiation concurrently. During a lull in treatment, I had another scan. The result was completely unexpected: no sign of the cancer. I continued chemo and regular scans. There's been no sign of cancer since then.

A couple of years later, I became involved in the American Lung Association in Alaska. The more I've learned about ALA, the more committed and enthusiastic I've become about the work of ALA, especially in research and education. For the 2021 Cycle for Air in Alaska, I join thousands of other cyclists and the American Lung Association to raise money to fight lung disease and increase awareness about the importance of lung health.

Lung disease can take someone's breath away, leaving them unable to work, exercise or play. Growing faster than almost any other major illness, lung disease, including lung cancer, asthma and emphysema is the third leading cause of the death in the United States. On top of that we have Covid-19, a respiratory diseases that has wreaked havoc around the world.

Participant
Registered for this event.
8