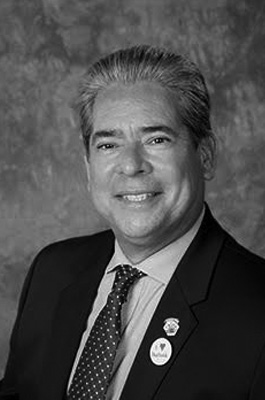 Bob was committed to community service at a very early age. Growing up he was an active member of the Boy Scouts and the Police Explorer program that molded his professional career.  During his 28 years of public service in Law Enforcement, he learned the value of working with residents, businesses and neighborhoods in a collaborative effort to find solutions to complex community issues.   As a former Community Liaison Officer, he has experience in bringing the community and local agencies together to find solutions that address problems to make a difference.  He worked with the Explorers as a Youth Services Program Coordinator for nine years and he was successful in building strong community ties with local businesses and residents to build support for the programs that he has overseen.  He knows the value of investing in our youth through collaborative efforts with the school district and partnerships with local non-profit organizations.  Bob is currently a Reserve Police Officer and he is committed to working tirelessly to meet the needs of our community.

Bob’s creative and innovative leadership style has resulted in various Burbank community events which have generated overwhelming community participation:  As Vice Mayor, in 2014, he suggested hosting the city’s first-ever “Rock-a-Hula” pool party for older adults. This has become an annual event.   As Vice Mayor, Bob suggested Burbank participate as a Host Town to the Athletes of the Special Olympics World Games.  Bob was named Mayor in July 2015 and he had the honor to welcomed delegations from Zimbabwe and Botswana. Burbank was part of a World-Wide Event.

As Mayor, in June 2015, City Council held the first ever Open House to reach out to the community.  It has become well-attended annual community event.  Bob continues to encourage residents to get involved in local government.

Bob’s creative thinking along with the professional and talented staff in the Public Information Office produced an Emmy Award winning video, “Drawing Power of Burbank”, the 2015 State of the City address by then Mayor Frutos.

Bob has been a resident of Burbank for 26 years.  He lives in the very same home he purchased over 26 years ago, where he lives with his wife Laura, his mother Isabel and their dog Katarina.

“I will ensure that our city is responsive to the concerns of our community members and that Burbank continues to be the community we love to call home.”